How To Heal Scars The Natural Way 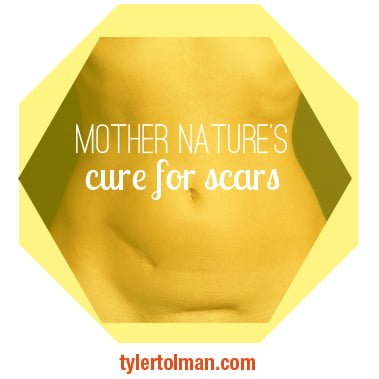 How To Heal Scars The Natural Way

Being a bit of a dare devil adrenaline junkie, I have to say that I know a thing or two about how to heal scars! I’ve had some big nasty cuts on my knees from falling off bikes, running down hills and all kinds of crazy stuff.

If you want to avoid a scar, I’ll say straight up that allowing it to heal properly in the first place is a really big thing.  From my experience if you have a big cut, go and get some small, tight stitches and do your best not to be moving around. Because if you don't do that you’ll just be aggravating the injury.

After the wound has closed, things like vitamin E oil, and fresh aloe vera gel are absolutely beautiful to use on the skin. Aloe vera is often called the potted physician, as it’s fantastic for any type of skin problem, and can really help in healing a cut.

Another thing I tried is oil from an amazing healing plant called Helichrysum. My dad mixes helichrysum oil with some other great botanicals to make a healing balm called Healing Chrysm. I had two identical scars on each of my knees and I decided to test out this Healing Chrysm by applying it to only one of the scars, and I have to say I noticed a BIG difference. It’s not cheap, but it’s super powerful for healing.

But ultimately, the one thing I’ve learned over time and distance, is that fasting is the best healer for scars. I’ve seen it in myself, and I’ve seen it in facilitating extended fasts for other people. During a 10-14 day water fast the body enters a process called autolysis where it basically self digests any superfluous tissue. The body literally takes all the energy that would normally be used for digestion and instead uses that energy to heal everything, including deconstructing old scar tissue.

I had a client who had a really big lump of scar tissue on his forehead where doctors had attempted to remove some skin cancer. He did a 21 day water fast and the scar healed right up. Afterwards I couldn’t even see the scar anymore, it just looked like one of the lines on somebody’s forehead.

The level of healing that happens during a water fast is just so profound. If you really want to heal up a scar, this is the way to go. External botanicals will help a little, but they are limited compared to the the healing that takes place during a water fast. It’s really a beautiful process to just go lie down, rest and fast. Let the body fully regenerate the way that it should.

How Essential Oils Are Made by Coach Emma Bliss