Why You Must Use Natural Deodorant - Stop Using Chemicals
Sign up for our FREE weekly web event!
JOIN NOW! 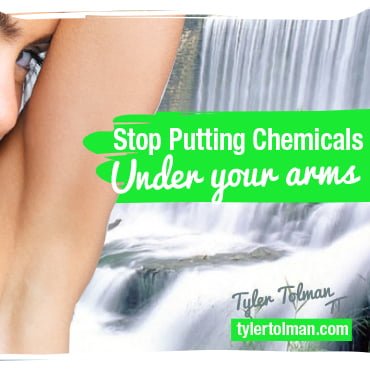 So why do you need need to make a shift to using natural deodorant? Deodorants and antiperspirants are common place in todays world and the truth is that they are actually really dangerous and a potential cause of cancer.

Why? The elimination of toxins is vital to our health. The fact that the body has so many different ways to eliminate toxins is evidence of that. Sweating is a big one. The lymphatic system carries wastes from inside the body through the pores of our skin. The sweat literally ‘pours’ out toxins from inside the body through the pores on our skin with the largest pores being found in our armpits.

Now if you’re eating a diet that is out of sync it’s likely that your sweat is going to stink! A lot people assume all sweat stinks, but that’s just not the case. I personally haven’t used deodorant in over 10 years and even when I exercise I don’t stink. I might have a little bit of a pungent odour but it’s generally not offensive.

As diet and lifestyles have changed and we’ve become more ‘stinky’ deodorants are now considered standard place and a product that most people use without thinking. But logically, if you stink isn’t it smarter to look at the cause rather than covering it up? And what dangers are there behind using these products?

This Is What Really Stinks

There are some very legitimate reasons not to be using commercial deodorants.

Firstly most of them contain hormone-disrupting chemical fragrances that absorb into the skin and disrupt the endocrine system. ‘Fragrances’ is a sneaky term to include chemicals in formulations without you realising. Most of these ‘fragrances’ contain over a dozen known carcinogens (a carcinogen is something that is known to cause cancer in the genes).

Secondly most deodorants contain propylene glycol another carcinogen which blocks and covers up the skin and is also used as radiator fluid in cars.

So just as the body is trying to eliminate toxins, going and putting something on there that is known to cause cancer is probably not the way to go.

But even worse than fragrances and propylene glycol is antiperspirant. This is because antiperspirants contain aluminium which is specifically designed to clog the pores not allowing you to sweat. This process actually changes the physiology of your body and in the US antiperspirants are considered an over the counter drug because of this.

Most antiperspirants contain aluminium in the form of aluminium salts like aluminium chloride, aluminium chlorohydrate or aluminium zirconium compounds. Researchers from the Department of Medicine at the University of California published a study in 2010 showing how extended exposure to Aluminium salts causes neurotoxicity. Aluminium has also been linked to Alzheimer’s disease.

If you look at the statistics of women and breast cancer it’s quite shocking. Many studies are showing a disproportionately high incidence of breast cancer in the area where deodorants are applied. For women it’s almost impossible to find a commercial deodorant in a grocery store that isn’t an antiperspirant. The breasts are made up of a big wiring of the lymphatic system tissue. I believe there is another link to breast cancer from wearing underwire bras which pinch the lymphatic system. Wearing bras that impede the removal of toxins plus applying aluminium and other chemicals to that area is just a spell for disaster.

So imagine the situation of having a body full of toxins, the lymphatic system is trying to remove these toxins through the armpits and then you try to block it and apply other toxins that are known to cause cancer. Surely there’s got to be a better way?

Even more importantly look to the source of the odour by assessing your diet and lifestyle. Make sure you are eating a clean diet and that all your channels of elimination are open and functioning optimally. This includes having a clean colon, drinking plenty of water and doing breathing exercises. My 4 day Colon Cleanse is a powerful way to take pressure off other systems of elimination.